Recently I was watching an older video of a very well respected Wado instructor.  This video started off with a monologue of the instructor speaking about 空 “kara”, a Zen Buddhist concept of “understanding emptiness”.  This Wado instructor explained how his Zen priest had given him a life task of “experiencing emptiness” and how through Karate he was working on that task.

The concept of “emptiness” is one that comes from Zen and Buddhism.

As with many of the terms discussed on our web page, I typically try and do a deep dive in the actual Kanji used to represent the Japanese term in an attempt use the Kanji brush strokes / constituent parts to get a better understanding of the concept and how it applies in my Wado practice. 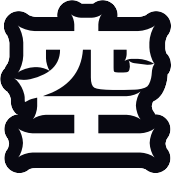 空 – “kara” has two constituent parts (as per jisho.org).  The bottom portion of this kanji 工 means “craft, construction”. The top portion 穴 has different meanings, but I will use the first three in this discussion which are: “hole, aperture, slit”.

So what do “craft and construction” have to do with “hole, aperture and slit”? and how do these concepts help a Wado Yudansha practitioner not only understand but more importantly experience emptiness?

Let’s break this down into two parts: the first, to study the concept by looking at the relationship between “creation and crafting” with “hole, aperture and slit” and second to discuss Wado practice and its relation to Kara.

2. The western translation of the word “emptiness” is a very challenging concept, hence a study of the actual kanji can help bring about a paradigm shift for the practitioner to consider “creating something that has no inherent nature, and can always be broken down into its multiple parts”.  Emptiness can also be considered as something that changes, just like how my practice of Junzuki has changed from when I first stepped on the dojo floor to now, almost 30 years later.  To me, the concept of emptiness presents an opportunity, a “field of potential” where I do not expect thing to stay the same, as is the nature of the universe.  In my practice, I continue to work on understanding and to experience  空. So how do I practice emptiness?  Again, thanks to Shiomitsu Sensei, and his constant reminder of “just do it”, “no tension”, “smile” and “practice, practice, practice” words of encouragement, I am at ease that Wado practice does not need to be stale, and rigid, but to consider the infinite combinations and permutations of situations and techniques.   To remember and work on “proper” technical execution, but also allow the practice to happen.  At the time that Sensei made these comments during his courses and as a younger practitioner, I was pleasantly surprised at how these statements made practice so enjoyable and memorable.  Sensei was preparing our fertile minds and bodies to let go of too much thinking and feel our bodies as we moved from one stance to another, or be flexible enough to adjust and let the practice happen.

So in conclusion, I hope that I can continue to deepen my practice through considering the emptiness nature of Wado, and remember what Shiomitsu Sensei always continued to say and do: always smiling and practising hard!